Time to read
2 minutes
Print
a- a+
Read so far

Through a referendum held in 1993, SIFPS was authorized to levy taxes to pay for its
services through CRD By-law No. 2165 that established a maximum mill rate of 0.6806.
Since then, the by-law has been amended several times, last time in 1999, when the
mill rate was increased to 0.85.

As shown in Figure 1, up to 2013 SIFPS has never “used” the full allowable tax room.
Due to its fixed mill rate1 SIFPS may see declining revenues as property assessments
fall. 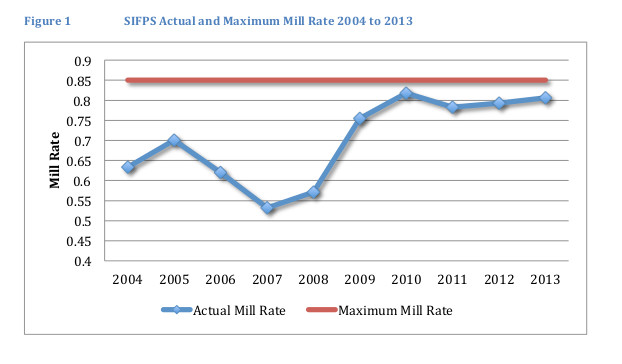 SIFPS Budget and Funding
Funding of SIFPS services is through property taxes levied on Saturna with one
exception – funding for Saturna Island Rescue (SIR or the ambulance). Island Health
provides $10,000 annually, which, along with donations, pay for the cost of SIR.
SIFPS receives $200,000 annually from property taxes. The taxes are channeled
through the CRD, but not for free. In 2013, $204,402 was collected from Saturna
property owners, but only $200,000 reached SIFPS. CRD kept the difference $4,402
plus the PILTs2 as an “administration fee”. 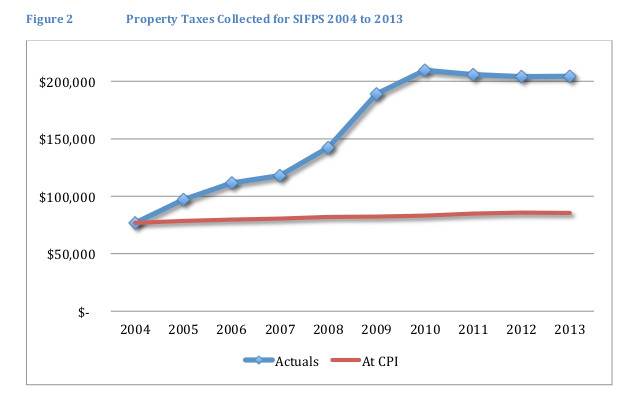 So why the vast increase in SIFPS budget?
In general, CPI is a broad measure of expected cost increases for public services. In
SIFPS case it is not a fair comparison. Anyone who has been on the island in the past
few years cannot have missed the two new fire halls. With a construction budget of
$1.2 million, SIFPS completed the fire halls in 2011 financed with a combination of
donations and loans.
2
PILTS is short for “payment in lieu of taxes” paid by the Federal government instead of property taxes.

Saturna Island Property Owners Association
Property Taxes 101: Part III
3
In 2011, SIFPS converted the construction loan to a mortgage and due to lower than
anticipated construction costs and higher than anticipated donations the total mortgage
was $300,000. On December 31, 2013 the outstanding balance of the mortgage was
$114,000, which means that the mortgage is being paid down by approximately
$65,000 per year. Based on that rate, the mortgage will be fully paid off by in early 2016.

Lower Taxes in the Future
After the mortgage is paid off, as a tax payer, we should expect tax levies to decline to
a “steady state” level that reflects the operating expenses and a capital reserve for
future building maintenance and vehicle replacements.
According to our analysis, the current annual operating budget is approximately
$96,000 (including contingency) and can be expected to increase by inflation. A capital
reserve, with the addition of $25,000-$30,000 each year would be financially prudent3.
As shown in figure 3, this results in an estimated future tax take-out of between
$120,000-$130,000 per year growing with inflation. It is still a substantial increase over
the $77,000 budget in 2004, but it reflects a higher quality of service than previously
available. This may even be reflected in a lower fire insurance premium for property
owners out on East Point. 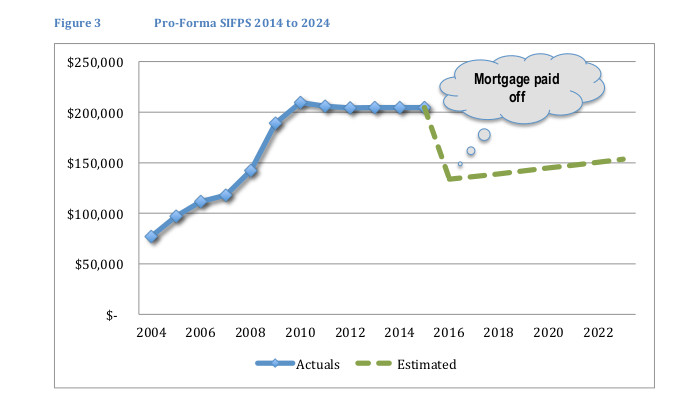 Property Taxes 101: Part III
4
Conclusion
As other islands are mired in controversy and rapidly growing costs for new fire halls,
we should all feel proud of what the Saturna community and SIFPS have accomplished.
Our fire response services have improved dramatically. Our hard-working Fire Chief and
volunteer fire fighters are better outfitted with more reliable equipment and are better
prepared to respond to devastating fires.
Having said that, we expect that the amount of property taxes directed to SIFPS should
decline in line with our analysis once the mortgage is paid off. We want to avoid a
situation where a tax-funded organization such as SIFPS, which raised taxes to fund a
particular project, redirects those now surplus funds to other projects without tax
payers having a say in how those funds are used.