Time to read
3 minutes
Print
a- a+
Read so far

Saturna Island Property Owners Association
Property Taxes 101: Part II
1
The
Islands
Trust
Mandate
The Province enacted the Islands Trust Act in 1974 with the objective to protect the
unique character and environment of the islands in the Salish Sea. The Act gives the
Islands Trust, a unique form of local government, the following powers and
responsibilities:
• Official community plans
• Zoning and rural land use bylaws
• Subdivision bylaws
• Development permits
• Regulation of soil removal and deposit
• Regulation of buildings
• Imposition of development cost charges to pay for parks and other services
A lesser-known aspect, established by the Islands Trust Act, is the Islands Trust Fund,
which acquires and holds land and interests in land for the protection of special areas
and features of the islands and waters of the Salish Sea for the “benefit of all British
Columbians”
The Trust Area covers 13 major islands and 450 smaller islands, 18,758 properties and
has a population of 25,5701.
Islands
Trust
Budget
and
Funding
The Islands Trust is primarily funded through property taxes levied in the Trust Area. A
small portion (3% of total funding) comes from a provincial grant that has steadily
declined from $545,000 in 1994 to $187,000 in 2013.
Between 2004 and 2013 the Islands Trust budget grew by 67%, from $3.8 million to
$6.4 million, which is a steep increase compared to the Consumer Price Index (CPI or
inflation) of 11%. As shown in Figure 1, in the past year the rapid growth in costs has
been reversed and between 2012 and 2013 the budget even decreased somewhat, but
the gap between CPI and actual costs still stands at $2.1 million.
1
2011
census
aturna Island Property Owners Association
Property Taxes 101: Part II
2 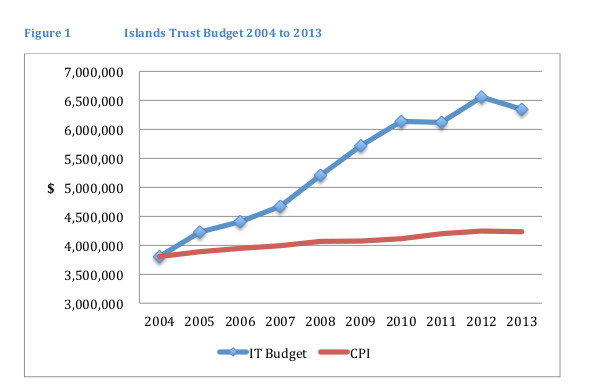 Over the same period, 2004-2013, property taxes collected on Saturna for the Islands
Trust doubled (Figure 2), which means that the proportion paid by Saturna has
increased. In 2013, Saturna property owners paid $180,000 to the Islands Trust, the
equivalent of 2.8% of the total Island’s Trust budget, but we only represent 1.3% of
total population in the trust area. 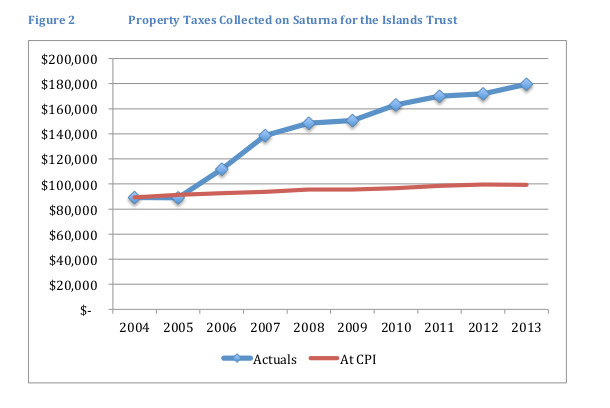 aturna Island Property Owners Association
Property Taxes 101: Part II
3
So
why
the
vast
increase
in
Islands
Trust
budget?
In general, CPI is a broad measure of expected cost increases for public services.
Where the quality of services is improved or where due to population growth more
services have to be provided, increases larger than inflation could be expected. So let
us look at what potentially could have driven up the budget for the Islands Trust:
• Substantial growth in population and the number of properties resulting in an
increased volume of requests for changes to zoning and sub-divisions.
• Developing new Official Community Plans.
• Provincially directed programs.
So, what actually happened?
Over the past decade there has been virtually no change in population. From the 2006
to 2011 the Trust area population grew by 0.8%. No data is available on the number of
properties on each island, but with slowing population growth it is reasonable to expect
that the demand for re-zoning and sub-divisions are not growing faster than population,
that is less than 0.15% per year.
Developing new Official Community Plans (OCP) is a large undertaking and does chew
up staff resources. Over the past decade no new OCPs have been developed.
In the past ten years there has been two (2) provincially directed programs: climate
change and riparian area regulations, both of which are substantially complete. These
required revisions to either zoning or OCP’s.
It is clear that the large increase in the Islands Trust budget is neither growth nor
service driven. So what increased?
As shown in Figure 3, between 2004 and 2013, Trust staff and administration that
includes all staff in Victoria, Salt Spring and Gabriola increased by $1.9 million (64%) to
$4.9 million annually. Drilling into the numbers shows that salaries and benefits alone
increased by 65%, a combination of inflation (11%), number of staff (+40%)2 and salary
increases over and above inflation (+10%)3.
Legal costs almost doubled and program costs went up 60%.
Trustee costs also almost doubled - from $440,000 to $801,000, primarily driven by
higher remuneration. In 2010, Trust Council voted in favour of a 65% increase in the
overall remuneration for trustees to take effect in 2012. The increases differed widely
among the islands. For example, Saturna’s increase was 33%, or about $2,500 per year
(to about $10,000 which includes taxable benefits). Salt Spring increased by 132% to
$30,000 per trustee, Gabriola by 83% to $18,600 per trustee and North Pender by 64%
2
Islands Trust does not provide detailed data on number of staff. These estimates have been derived from various sources.
3
Ibid.
aturna Island Property Owners Association
Property Taxes 101: Part II
4
to $14,000 per trustee. Since 2004, the remuneration for the Chair of the Islands Trust
has increased by 120%, from $32,000 to almost $60,000 annually. 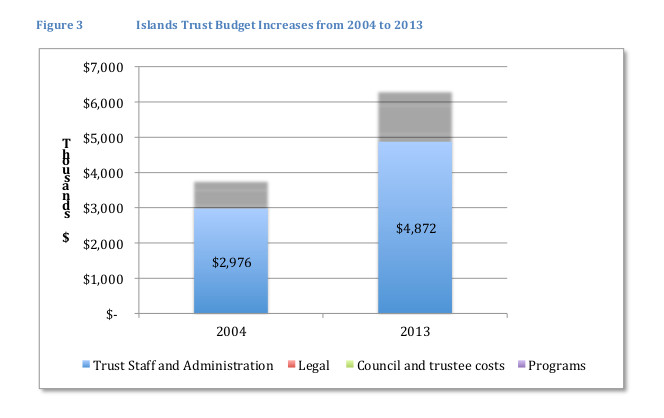 Trust
Fund
Costs
and
Benefits
As shown in Figure 4, over the past 20 years the Province has steadily decreased its
funding of the Islands Trust while the cost of managing the Trust Fund has increased
due to having more of the Trust area covenanted “for the benefit of all British
Columbians”. With more land covenanted, the tax base in the Trust Area is reduced
(because land that is covenanted pays lower taxes) and non-covenanted properties will
bear a larger share of the tax burden. With several land conservancy agencies active to
protect land it begs the question why we have a tax-funded, local land use planning
body like the Islands Trust operating, and funding, a land conservancy whose purpose
is to benefit all British Columbians? 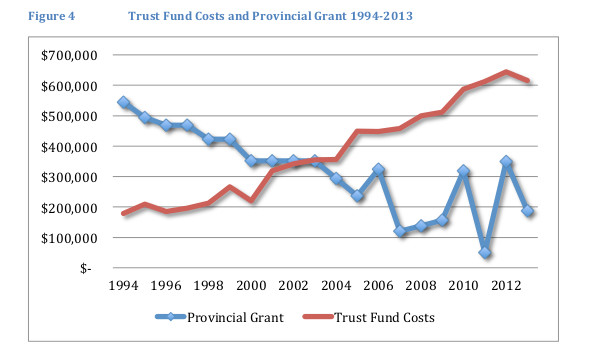 Conclusion
When it comes to taxes it is hard, if not impossible, to determine whether one receives
sufficient “value for money”. It is very subjective, where one person may feel it is
wasted money, others feel it is money well spent. But it is clear, even with the limited
data available, that the Islands Trust is far from cost effective.
Any organization, whose costs climb at a rate six times inflation with no expansion of
service and no discernable improvement in the quality of services, is clearly not cost
effective, nor is it well managed. The Islands Trust displays a profound lack of
accountability towards the taxpayer, which is further exacerbated by the fact that while
other public agencies have had to find efficiencies and increase productivity, the
Islands Trust has become more inefficient and less productive.
It is also questionable, in light of reduced provincial funding, whether the Islands Trust
should be managing the Trust Fund thereby having local taxpayers foot the bill for
something that is of benefit to entire British Columbia.